History of the LeRoy Public Library

Citizens of LeRoy, Minnesota are the possessors of one of the finest libraries in the state with a total number of volumes amounting to 3,730 (1935).  Today the library offers the most up-to-date fiction and non-fiction reading material to its patrons and is one of the busiest places in the town.
Early history of the library dates back to 1901 when the Ladies Book Club was organized with 13 members.  The purpose of organization of this club was to become better acquainted with the best literature of the day, and to further the education facilities of the village.
Each member of the little club was to purchase two books each year to be put into circulation and passed on to the next member every two weeks and at the close of the year the books were to be put aside for future library use.
First officers of the little group were:  Mrs. M. J. Hart, president; Mrs. W. K. Porter, treasurer and Mrs. F. W. Sprung, secretary.  In 1908’s work amounted to $169.80.  1935) and started a little library.
Members of the club served as librarians and continued efforts to raise money for the purchase of additional books and to build up a fund for the future library building.  In 1911 the patrons read 5,066 books.
In 1914 the City Council voted an allowance of $10.00 per month for the up-keep of the building and discussed the construction of a new library.  These discussions were met with much enthusiasm by the club.
The sudden death of Mrs. Charles Palmer, promoter and one of the most ardent workers, and the gift of lots by Mr. J. D. Palmer as a memorial decided the issue of building IMMEDIATELY.  Plans were drawn up and action started at once.
The city levied a tax and with the $1,500.00 on hand it was decided to have a big mass meeting.  Dr. Milo B. Price of Pillsbury Academy, Miss Baldwin, state librarian and Dr. Leal Headly, local school superintendent were secured as speakers for the meeting.  Nearly $5,000 was subscribed to the Library fund at this successful meeting.  Friends and workers for miles around subscribed freely that Leroy might have a library building.
The Library was built and when completed a debt of $1,000 still remained unpaid.  This debt was slowly paid through the work of the ladies organization and thereupon the library was presented to the city.  The library was formally dedicated January 13, 1916.
The building committee was:  Mrs. M. J. Hart, Mrs. Judson B. Palmer, Mrs. A. D. Brown, Mrs. F. T. Young and Mrs. Garner as chairman.
Since then the Library Association has donated $100 annually for the purchase of new books.  After 1927 the annual gift was no longer needed, due to the levying of a mill tax by the city council for the support of the institution.  Money was then spent by the association for the purchase of table and chairs for the junior readers and the furnishing of s club room in the basement.  Lloyd Nauman and Harvey Klemas gave their services in 1929 to construct a children’s table for the building at the manual training department.  The Ladies Club also donated a large dictionary.  In 1916, Will Frank presented the library with a beautiful Waterbury Pendulum wall clock which adorns the front wall of the building and softly ticks away the hours.
The Library Association disbanded in May 1931 after the city council had voted a tax to supply the needs of the library and as the work for which the association had been organized was now accomplished.
Mrs. M. J. Hart was the first president in 1901.  She served as president for many years and much credit is due her for her efforts in working for the association’s goal.  In 1903 Mrs. Hambrecht was elected president and she was followed by Mrs. M. T. Dunn, May 4, 1904.  On Nov. 1, 1905, Mrs. Hart again resumed her duties as president of the club and remained in this office until sh moved to California in 1921 when she resigned.  Following her aspresident was Mrs. A. E. Henslin until 1923. From 1923 to 1929 Mrs. A. D. Brown held the president’s chair.  From May ,1929 to the time of disbandment in May, 1931 Mrs. F. T. Young served as president.
Today Leroy has a beautiful library due to the united efforts of the citizens of the town.  These citizens were led in the cause by a little group of determined women who set their goals and after many years
of conscientious work received their reward in the realization of a library of which all can be proud.

Librarians who have worked in the building since its erection (through 1935) were Miss Silsby, one year; Miss Leah Lewis, eight years; and Miss Elizabeth Ann Price, 11 years and still serving in 1935.  Miss Price said, “The winter months are the most rushing with as many as 184 books in one day.”  During 1934 the total of 9,622 volumes were loaned out to readers.

*From the 65th Anniversary Edition-LeRoy Independent

Today LeRoy has a beautiful library due to the united efforts of the citizens of the town.  These citizens were led in the cause by a little group of determined women who set their goal and after many years of conscientious work received their reward in the realization of a library of which all can be proud.  The LeRoy Public Library building, built in 1915 is the only example of the small town Carnegie type Classical Revival style library building left intact in Mower County.  The library is a small masonry structure of one and half stories, counting the raised basement.  It is faced in rough, red-brown-orange brick with a red grout, limestone trim, and a wood portico painted white.  A plaque on the front façade reads:  This building was erected by the LeRoy Library Association with the support of the citizens on ground donated by Judson D. Palmer.  The building has excellent exterior integrity.  Two limestone columns with Tuscan capitals, flank the original oak front entry door, which contains beveled glass.  Above the front door is a limestone header incised with “Public Library.”  The library interior is blonde finished oak with oak chair rails, wainscoting and door and window moldings.  In November 1965 the library suffered a fire which damaged the interior and destroyed almost 5,000 books.  Recently the library had an addition added which is in keeping with the original style of architecture.  The building is listed on the National Register of Historic Places.

More News found on The City of LeRoy’s Website of The LeRoy Library
In 1901, a group of ladies interested in expanding the educational opportunities available and feeling a need for additional cultural influences, organized the Book Club. The group, numbering 13, met on a regular basis to purchase and pass along books. Each was to purchase two books a year and these were to be passed along every two weeks. At the end of the year, they could be given to others outside the club.

Soon the supply of books and the number of members surpassed the space available in the members’ homes. In 1908, the group under the leadership of Mrs. Hart, Mrs. Porter and Mrs. Sprung; formed the Library Association. They then began to raise funds for a permanent building.

The first library was in a building on Main Street, later the location of John’s Tire Shop. Members served as librarians and the community was invited to share the books available.

J.D. Palmer donated lots in northern LeRoy Village for a library site. Plans were drawn up and in 1914, the city voted to assist the library project. A mass meeting raised $5,000. With volunteer help, the building was erected in 1915. The ladies held teas to pay off the remaining $1,000 debt and presented the building to the city on January 13, 1916.

A fire in November of 1965 gutted the building and destroyed over 5,000 books. The LeRoy Library Association again was organized to restore the library. Through efforts of many in the community, the library reopened in the fall of 1966. It had 505 books on hand from the original library and 600 on loan from the state.

The LeRoy library joined the county library system in 1967. The library is governed by the LeRoy Library Board under the direction of the LeRoy City Council.

Feb. 9, 1984-The picture “Old Swimming Hole’ donated to the LeRoy Public Library.  The picture was painted from a slide taken by, O.T. Palmer visiting LeRoy.

1990- The LeRoy Public Library has established a video learning library.  This was done through a matching grant, thanks to the help and support of the community.

April 11, 1991-75th anniversary of the LeRoy Public Library is celebrated.

May 23, 1996-Library project has groundbreaking for new addition’ Community wide fund raising for library.  In 1976-5,000 books were available for checkouts; in 1996-10,000 books.  Expansion funded in part by a MN Historical Society grant.  $50,000 donated to the library by former LeRoy resident in memory of her parents, George R. and Dagmar Marie Larsen and deceased brothers and sister.

January 2008 issue-Rhonda Barnes named “No. #1 Country Librarian” in the nation, in the National Magazine, Country in their ‘Country Extra”.  This magazine has a circulation of over one million.

May 2010-LeRoy Public Library conducted a wide inventory of over 31,000 items. Repeated a complete inventory, September 6, 2013, for a SELCO 3 year OCLC Reclamation Project

November 2010-Greg Preslicka, the founder of The Big Picture from Savage, Minnesota painted a historical LeRoy mural on the 2nd floor of the library by the office work space.  Grant funds $3,300 for the mural were given to the LeRoy Public Library by the Minnesota Library Legacy through SELCO. “This project was funded in part or in whole with money from Minnesota’s Arts and Cultural Heritage Fund.”

June 2010=LeRoy Public Library has its own logo & website:  https://leroy.lib.mn.us

Summer 2015=1st year to have LeRoy’s “ART in the PARK” program. The Mower County Traveling Summer Art Trailer came to LeRoy for 8 sessions (4 classes w/two age groups.) “This project was funded in part or in whole with money from Minnesota’s Arts and Cultural Heritage Fund.”

7/1/2017-Jaguar Communications connects new 1,200 foot high-speed fiber-optic network to the library. This was possible by a grant written by SELCO.

9/11/2020=Governor Tim Walz today signed Executive Order 20-89, extending the COVID-19 peacetime emergency by 30 days to ensure the state can continue to quickly and effectively respond to the COVID-19 pandemic.

11/23/2020=Brian Rice installed 6 new basement windows bought from the LeRoy Lumber Yard. Painting by Will McGill.  1 upper storm window yet to be installed 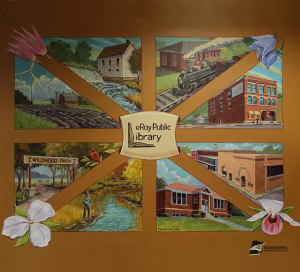 “This project was funded in part or in whole with money from the Minnesota’s Arts and Cultural Heritage Fund.”